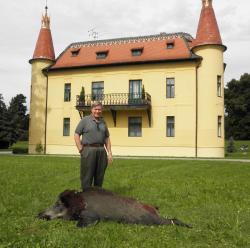 Hunting has a long tradition here, which many hunting guests from abroad appreciate by their regular and repeated visits to Slovakia. Given the level of services offered and the amount of the game in the grounds, they prefer the overhead grounds of LESY SR, š. p. with which I also cooperate. My company HUNTER NH, s.r.o. has had contract with the company LESY SR, š.p. for several years, based on which it provides for the possibility of hunting in overhead state grounds under the same conditions as offered by the state forests themselves. Your advantage if you order hunting through me is that I personally supervise the course of the hunting action and using my contacts and experience I will do everything to achieve a successful result and your satisfaction.

In Slovakia, in addition to state forests, there are very few hunting ground users who can provide a comparable hunting experience and accompanying service. Several times I was disappointed in the attitude of the “popular PZs” and in the level of their professionalism, and I was attracted to lower prices. Even for the price of a higher hunting fee, I will offer my guests only events in verified areas and with the cooperation of reliable partners. Of course there are some exceptions among hunting organizations (unfortunately very few), and I plan to work with these users of hunting grounds in the future.

As for the species of game that can be hunted more advantageously in Slovakia than elsewhere, it is a mouflon, a wild boar in the form of a common hunt and a pheasant in a pheasantry. 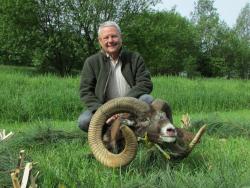 I can arrange the mouflon hunting in free grounds and in enclosures in the use of the company LESY SR, š.p., as well as in some private hunting grounds. Both the abundance and the quality of the population of mouflon living in Slovakia are excellent and it is not a problem to catch the mouflon of the required category by guests within 2-3 walks.

A sought-after item in Slovakia is common hunting for wild boar, both in free hunting grounds as well as in game enclosures. As far as free hunting grounds are concerned, I prefer 2-day hunts where there is no problem to reach the hunting bag of 20-30 wild boars per day in free hunting grounds, or 30-50 pcs. in the enclosure. The number of shooters is set in an effort to occupy only "hot" stands at max. 15 (in enclosure up to 12) shooters. Recently, we have been using (with the consent of the hunting territory user) the legally given possibility to hunt non-trophy deer, fallow deer and mouflon on common hunts. From the territorial point of view, I prefer the districts in the south of Slovakia (near Rimavská Sobota, Tornaľa, Veľký Krtíš and Lučenec). 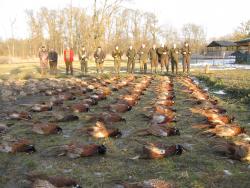 There are many state and private pheasantries in Slovakia, but unfortunately the level of hunting is falling sharply and in an effort to increase the percentage of caught pheasants, pheasantry users throw pheasants out of the boxes in front of the shooters so that not even one pheasant can fly away. Likewise, the shooting stands are placed too densely and the flying pheasant is shot at even by a third neighbour. My philosophy, implemented in practice in the pheasantry Nové Osady near Galanta, is different in this respect. Of course, my goal is to catch as many of the pheasants released as possible, but by no means at the expense of hunting. Stands are marked so that guests do not shoot each other pheasants. With sophisticated drive organization and suitable terrain, pheasantry hunting can be brought closer to wildlife hunting.

In Slovakia, if the restriction of the maximum weight limit for bear hunting was abolished, hunting for our largest beast would also be interesting. In our case, however, few people prefer to catch a 100-kilogram “teddy bear” in Slovakia over a proper bear in Romania. 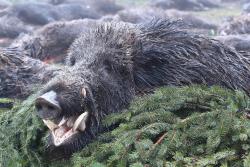 If, despite my finding that roe deer, red deer or fallow deer is preferable to hunt in Hungary or Romania, you decide as a local patriot for hunting for this kind of game in Slovakia, of course I am willing and able to arrange everything for you to leave the hunting satisfied.

All rights reserved - www.hunternh.sk
Creating web pages by GRANDIOSOFT
© Copyright
This website uses cookies to ensure you get the best experience on our website. For more information, visit the page how we use cookies
I AGREE    Refuse